If you live in a small town anywhere in the country, you are probably aware of the county-fair.  Not the big 'state-fairs' that are put on by a lot of big companies and state-governments.  I'm talking about the smaller county-fairs that are put on by hardworking folks who sign up to be on a board, put in long hours for no money, beg for sponsors, etc. all to bring a little enjoyment to the people who live in that area.

I will gladly admit to looking forward to the local fair every year.  Of course when I was a child, it was more for the cotton-candy, popcorn, and (seemingly) rickety rides brought in by a carnival and set up to the side of the main 'arena', and I will also admit to those things still having an appeal to me.  But these days it's more the food than the rides.  Wifey still gets a thrill over those 'twist-you-till-you-throw-up' rides however.

When I was young, the other thing that I really liked was that my Dad was in a group called  "The Young Farmers".  This group ruled the last two nights of the fair.  Two full nights of tractor pulls.  When I was young, the first night was for the local folks who wanted to pull their personal tractors.  There were a LOT more little farms then, and several farmers wanting to come and join in on the local competition.  Then the second night, the big hot-rods came out.  These things were big, strong, and LOUD!

In high school, and being the son of a Farmer of course I was in FFA, as were many of my friends.  The summer would find us planning out our weekends so that we could catch all the local ones around the area.  I don't know if was due to us liking seeing things we used daily with this much power, or what but we were ALWAYS there.

Now, all of that said this weekend was the annual Franklin-Simpson County Fair.  A full week of rides, contests, and corn-dogs (Mmmmm corn-dogs). 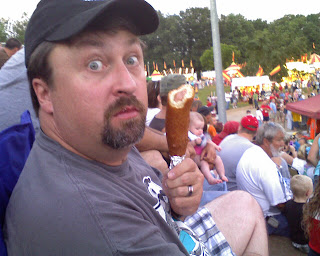 Remembering the final two days of the fair being so much fun as a child, I looked-forward to going to the tractor-pull at the end of the week.  This year, the last two nights were in stead not only a tractor-pull, but also a demolition derby!

I have to say  I was looking forward to the weekend all week. Friday night was the tractor pull.  Since Wifey isn't that big of a tractor-pull fan (yes I married a girl from town), I went alone.  No big deal, I found me a prime spot and current wait to enjoy the sites.

At this pull, there were two different types of tractors.  Super-Stock and Modified.   I am personally a little more fond of the Super-Stock because they look more like what I used to drive on my fathers farm.

I really like how you know exactly when they are taking the weight of the sled.  In the pics above, you can see them going down the track.  On the left, you see one one in mid-pull.  On the right (sorry for the blur) you can see one starting.  Notice the exhaust. When these tractors are revving up to pull the smoke is a grayish-white.  But when they actually start pulling you can immediately see the smoke turn to a coal-black.  Yes, it's not an efficient way of doing it.  Yes, it's not the most eco-friendly thing on the planet.  Whatever, to me it's way cool.

The other type of tractor that was there were the modifieds.  These tractors are from one to I've seen as many as 6 engines on a frame all hooked to one rear-end.  Normally these are the large 'hot-rod' engines like you see in dragsters.  But other types of engines are used too.  One very unique application are turbine engines. 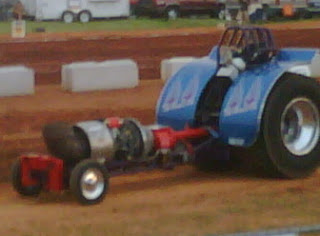 These engines are the engines that you would normally see powering a turbo-prop airplane engine, or a helicopter rotor.

OK, I could go on for hours on this, but I've still not gotten to the next night!  The demolition derby!  Saturday night both wifey and I went out for this event.  This event it simple.  People enter cars that have had all glass removed, reinforced with some (minimal) safety cages, and hit them into each other trying to destroy the other guys car.  The last person with a running vehicle wins.  I mean come on, what fun! 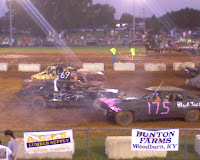 Last nights, event however came with something I've never seen.  "Lawn-Mower-Demolition-Derby".  Crazy.  The best part was the guy that was sitting behind saying, in about the most country accent available "This S#@! is about as Redneck as hell!".  I laughed, I yelled, I laughed more.  There was so much action going on I missed stuff.  We both had so much fun we are looking for others near by. 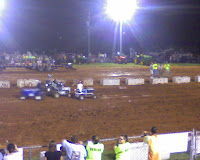 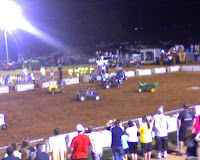 OH, and we even got to see a live version of C.O.P.S when two in the crown were put in hand-cuffs and led away by Franklin's Finest.  For the two nights, I was out less than $50.  I mean come on, you rarely get that much entertainment for your money.


So, if anyone in the area reading this blog is on the Franklin-Simpson, Ky fair board.  Well done, and thanks for a great weekend.
Posted by Unknown at 1:33 PM No comments: Links to this post

Some of you may or may not know, but I'm a reader.  I. LOVE. TO. READ.  So after weeks of reading everything I had here at the house that was 'on my list', AND after several suggestions by wifey to check it out, I head down to the Goodnight Memorial Library here in town.

Now, I haven't been to this library in years.  YEARS.  All my previous memories were of the massive card catalog on the bottom floor.  I even remember having a class on how to use it.  I thought I was so cool being able to just jot up to those cool little drawers and research what I wanted, then just walk right there.  Yeah, I guess I was a geek back then too.

Well, of course technology has made it's way to my little home-town library too.  I'm sure it's been there for years.  I haven't researched it yet (I'm sure it's somewhere on the link above), but I believe it was sometime around 2000.  The reason I say that is because all of the books I've checked out so far have mid to late 1999 as the last date stamped in that little 'check-out-card-holder-thingie' in the front cover.  No, I don't know the real name for it but you all know what I'm talking about.

I must say it's nice to have the technology there.  Searching for a book is so much easier with a quick database search provided by the in-house database.  And I also like knowing if a book is there or not when I go to look for it, not just that they have it.

I've even done an "ILL", (Intra-Library-Loan) for those of you not up on the current library lingo.  I will admit that I too didn't know this until 5 minutes after I had done it and while we were in the car driving away wifey started talking about me doing the 'ILL' and I was like 'Wha???', then she explained it.  What can I say I'm sometimes not the 'sharpest knife'.

Anyway, it's nice to know we have this great resource here in town.  I'm sure I'll be using it A LOT.
Posted by Unknown at 4:10 PM 1 comment: Links to this post