So, as you know I started this blog about moving home and the things I see or found or found again.  This entry is about something else.

What does 'Senior' mean in this instance?  At the time I took the position with "the book store that is really not doing well" it was just that, I had been in the field for over 15 years.  I had been in IT before Windows, in fact Microsoft was still working with IBM to make DOS.  Before the Mouse was part of the standard PC Setup.  Email was was called 'private message' on places like "CompuServe".  And yes... wait for it.... BEFORE THE INTERNET.  Yes Kids, there was a time. ( Oh wow I'm old..)

So with this move not only was I moving to a new phase of my career -management- but it was in a field that was new to me.  Distribution.  Up until now, I had either worked for people who sold computer systems to businesses, or I had been in the ever growing healthcare industry.

I've long had a 'career-path' and with this move I felt I was solidly on it.  Finally, I had been able to take that next big step into managing a team of other IT professionals.  Mentoring them, sharing what I had learned over all of those years from other 'Senior' IT professionals.  I. Loved. It.

But there was another thing.  I had learned some new skills at this job.  Data-Mining. ETL. Warehouse-Management Systems.  All things I just seemed to take to, like lost puzzle pieces in my skill-set.  Soon I was also learning to program in new computer languages.  I was building things from the ground up that was making a day-to-day difference in the business.  And because these things were liked and useful I was asked to build or rebuild other things that were needed.  I. LOVED. IT.

After a few years, the foundation started crumbling.  I could feel the quicksand starting to nip at my heals.  And finally, one day the call...  "We have decided to terminate your position...".

I know, especially in these times, that I'm not alone here.  I know there are a lot of others out there who had this same thing happen to them, including a lot of my own friends.  I could only take some solace in knowing that this wasn't due to my dropping the ball.  That it wasn't due to my performance.  It was business.  But that didn't help.

While drifting on the sea of what to do next, an island appeared.  I was EXTREMELY fortunate to get something fairly quickly.  And it had some really good perks.

First, it was a job.  I am and have always been one of those people who just can't stand to be on unemployment.  I know it's there.  I know it's a good thing if you need it but I would rather work.  Call me crazy.  I'm sure some of you may say I settled.  Maybe.  But I believed both then and now, that with the economy in the state it was at the time it was a very great thing.

Second, the position that I took was in PA.  It was over 12 hours away from everything and everyone we knew and loved.  Yes, we met new people.  Yes we now have some great friends in PA.  But PA was just not home.  And regardless of how hard we tried, it was just never going to be.

So, a new job?  In our home-town.  The town we had a history, and went to High-School, and were our family was, and we had so many friends in, and knew so much about already?  An even better decision.  I remember to this day the little 'happy dance' the wife did in the rest-area some where in the middle of Virginia where we just happened to be when I got the call.  ME? 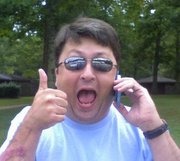 Was this job on par with the job I loved?  No.  I would be 'The Tech Guy' again.  I wouldn't be mentoring, I wouldn't be leading other professionals.  It would just be me, sole geek.  I knew that going in, I could handle that.  I've done this, I've knocked this type of job out of the park before.  I could do it again.

So I am welcomed in, everyone is great. Well, not everyone but that's part of being in society right?  I'm enjoying being the first 'IT Guy' for this company.  They weren't in an IT wasteland by any means.  But they needed some TLC as far as IT goes.  There were opportunities (not many) to build things for them that helped in the day-to-day business.

Things were good.  For a while.

Now, I need to make this abundantly clear.  This is a great company, with great people.  I didn't suddenly find that I had been sold a bill of goods to tempt me into taking the job.  It was just that my level of being unfulfilled career-wise would just never get better here.  It was an unfortunate reality.

After I had been there a while, things that I believed I could handle started being harder to handle.  Yes it was great to have a job, but another down-side was that it also paid less.  And after being unemployed and having to take on quite a bit of debt to maintain, things were (and still are) tough.  Again, I know I'm not the only one out there in this situation.  And I will admit to some bad decisions we made when times were better have added to our current situation.  AND I also know that there are others in far worse situations than I am.


But still, that doesn't change the fact that we haven't been on a vacation in almost 6 years.  Or that I bring my lunch every day to work which consists of a pack of cold-cuts, loaf of bread, and a bag of chips that I buy at the Dollar Store each Sunday.  (I get different chips and cold-cuts each week for variety. :-\ )

But a 'night out' is a luxury.  A night out WITH a movie? Non-existent.  A vacation?  Yeah right.

Now a confession.  I have NOT been very fun to be around for a while now.  It's affected how I deal with people.  It's affected my motivation, my appetite, my mental state, and my health in general.  Ya'll, my wife?  A SAINT!

So after working to stick it out and being in the job for over a year, I decided it was time to make a change.  It just had to be done.  I couldn't keep going expecting a sudden change unless I made it happen.  I owed that to my health, my marriage, and my career.

Suddenly, there was an opening very close.  Not more than 15 minutes away from town.  It was Distribution, and they were using the same Warehouse Management System that I had learned and knew.   It was a perfect fit!!  Then, I got an interview... I thought it went really well.... I was pumped!

That is, until not more than 5 days later I saw the 'posting date' on the job refresh.  I sent out my thank-you notes.  I sent the follow-up email.  It posted again.  Then again....  Then again on another job site...

I wanted to say:  "Yeah, Duh" or "Well, I kind of had that feeling 4 months ago when you reposted the job for the third time!"  But no.  I was nice.  I pushed it all down.  I thanked them for the opportunity.  I wished them a nice day.  I hung up.  And bled.

No really, I was on the way to the blood-mobile when I got the call.  But as I was sitting there literally bleeding, my broken heart was bleeding.  My will was bleeding away.  My career was bleeding away too.  I could feel it every time I squeezed that damn little red ball.

All this time, there was another light starting to brighten in my long, dark, dank, coal-dust encrusted tunnel.

I had heard about a new facility that was coming to our little town.  It was in that field I had learned I had so much skill in.  Of course, it didn't help that they were building the new facility RIGHT NEXT DOOR to where I worked.  I see the progress on the building EVERY DAY.  My hope had started to rise again.  But this time, I didn't let it overwhelm me.  I HAD to keep it in check for the inevitable deflation.

Then, it happened.  One Sunday I was doing what I had been doing every day for about 6 months now.  By that I mean using my data-mining skills on every online job board looking for a way out when suddenly I saw the job posting.

It read just like what I had done at the job I had loved so well.  It was a Distribution Job.  It was using the WMS that I knew.  It was a facility that was a shell and needed someone to come in and make sure every copper connection was properly tuned and ready to feed the vital data to where it needed to go.  Servers to build, equipment to configure, plans to compete.  It had to be mine.

I applied.  And just to be safe, I sent an email to the generic 'jobs@' email address.

Within a day or so I saw the status on my application change from "Applied" to "Under consideration".  WOO-HOO!!!!

Then, I got a call for an interview.  I went and talked to five or six people.  Even was grilled on some technical points by some of their techs.  Even caught their 'trick' questions.

As I was leaving the interview, I was very happy.  My ID said, you did well.  My EGO screamed "YOU NAILED IT!!!

For the next week, I was suspended in a blend of optimism, fear, anxiety, joy, and pessimism (yeah, I was messed up).  Then I got some follow up email questions.  Some follow-up phone calls.  My ever supportive wife was screaming to me "DUDE!  You have SO got this!!!"  Buy my pessimism was winning.  It had just felt like it had been so long since something really went my way.  I couldn't help it.

Then came the day.  An offer letter.  It was a great day.  Was I over-the-moon? No.  Remember that blend of emotions I talked about earlier?  Well, it was well entrenched.  It held sway over me.  I just knew that something would fall through even though there were absolutely no signs to say otherwise.

Finally, last week it happened.  The tunnel light became so bright that it washed those bad parts of my emotional blend back down into the darkness I had finally been able to emerge from.  It was a one paragraph email that sealed it.  "It’s official, all of your information has been reviewed and you are eligible to become an employee of..."  I wanted to jump through the Internet to the person who wrote it and give them a huge hug.  Instead, I called the first person who I tell news to.  That Saint of a wife I mentioned earlier.  Her joy for me, for us, was immediately evident. (Did I mention she was a Saint?  I married way above my level ya'll.)

So here I sit.  Notice given.  One of the customary two-weeks notice served. Thinking about what is to come.