Last weekend was the yearly car-show down-town on the square.  Now, as you all know I'm more or a scooter guy, but wow.  There were some really impressive cars down there.  Several I liked, and then there was the wish-list wifey gave me of the ones she wants when we hit the Lucky-Lotto....

There were not only old cars and pick-up trucks, but even dump trucks from the 40's and 50's.  Now, I'm sure they were 'the Thing' at the time, but sadly with the "more,bigger,faster,now" society we have now, there are personal trucks on the road that are bigger than these things.  But what are you gonna do.

Of course, the three that stood out to me were:

First, the green 50's model Chevy truck which brings back fond memories of my childhood.  My Grandfather had a '52 that we used on the farm, and that truthfully I learned to drive in.  Granted, it was the scene from a movie where the kid is constantly moving up and down in the seat, alternating between seeing over the dash, and being able to reach the pedals. 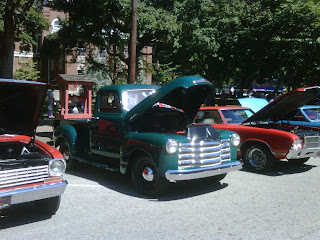 Of course, this one was clean and shiny not sadly on it's last legs with faded paint, no hub-caps (please), and the smell of pigs (it was the feed truck after all).  I wonder if I started this one, all of the little pigs would go running to the feeding spot?

There were several both the wife and I were "OH THAT IS SO COOL!" over.  But here is one that I have always wanted.  A Nash Metropolitan. 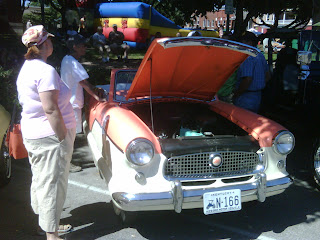 I mean, come on.  How cool is that little car.  They were even made in Nashville, just down the road from here.  Check them out here.  I would probably go for the blue or green rather than the pink however....

Finally, what small-town antique car show would be complete without this: 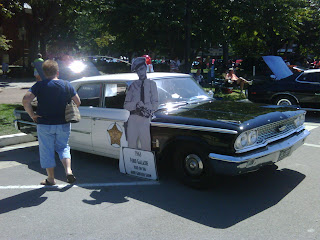 That's right, it's Andy and Barney's famous police car from Mayberry.  From the signs, this is one of the actual cars used on the show .  Truth or not, still pretty cool.

There were several others that I either was A) two into looking at it to think about getting a picture, or B) just was stupid and forgot.  But there were so many there.  I have to say it was quite cool.  Can't wait until next year.

I'm really fun being able to go do all of this fun stuff.  I had forgot what my small town had available.  I'm so happy that I got another chance to enjoy it. 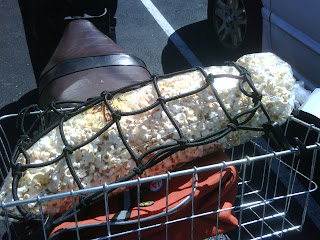 Yes, all packed up in Wifey's basket (I don't have one on the Stella) and ready for me to enjoy the yummy goodness.
Posted by Unknown at 10:46 AM